If you’re looking for a free VPN, you’ve probably come across Hola VPN once or twice in your search. While the free price tag might be appealing, many users report that they get what they pay for— and not in a good way.

Founded in 2012, Hola VPN has long touted itself as “the first peer-to-peer VPN.” With a free membership option, Hola VPN has enjoyed some popularity since its founding. But is it safe to use?

In this Hola VPN review, we’ll dive into its key features and see if there’s any security behind the low price tag. Read on to learn more about Hola VPN and how leading providers such as ExpressVPN and NordVPN might be better alternatives.

Despite the Spanish name, Hola VPN is an Israeli VPN provider with both free and premium options. While Israel is technically a safe jurisdiction, its extensive logging and previous collaboration with the “Fourteen Eyes” surveillance alliance puts user data at risk. As a result, Hola VPN users could have their data surrendered to any government in the alliance, such as the U.S. and most of the European Union.

Hola VPN’s security features are virtually nonexistent. In addition to having no encryption whatsoever, users share their bandwidth and devices over a peer-to-peer (P2P) network instead of dedicated VPN servers. This quality alone makes using Hola free VPN even less safe than going without a VPN.

To make matters even worse, Hola VPN also lacks the most basic security features, including an internet kill switch. Privacy is equally poor, with the privacy policy expressly stating that the VPN service may provide user data “to other trusted third party service providers or partners” or legal authorities.

Performance also varies by user location, and free users can only use Hola VPN for 30 minutes per hour.

On the upside, Hola VPN offers users up to ten simultaneous connections. This number is higher than some major VPNs, making it appealing to users with multiple devices or shared networks. Hola VPN is also available on every major operating system and device, including iOS and Android for mobile users.

However, these are common features of many of the best premium VPNs on the market. Surfshark, for example, offers users an unlimited number of simultaneous connections.

Most VPNs unblock geo-restricted streaming services and other content by rerouting traffic through dedicated foreign servers. Since Hola VPN uses its own users’ devices instead of its own server network, it usually can’t unblock Netflix and other major streaming services.

However, many users report that they can successfully unblock BBC iPlayer and ITV. While there are also reports of unblocking Netflix and Amazon Prime, these are exceptions to the norm.

In any case, unblocking content with Hola VPN is a matter of luck. Since your unblocking capability is based on the location of another user’s computer, the unblocking ability is random at best. Many streaming services are also quick to crack down on the IPs of Hola VPN users, so most services are unavailable anyway.

By contrast, most premium VPNs offer massive networks of dedicated servers that can reliably unblock most streaming services. NordVPN, for example, is famous for unblocking Netflix in many major countries.

The Hola network is unreliable. In the best cases, however, connecting to a nearby server (read: another Hola user) usually offers speeds similar to those you’d have without using a VPN.

For example, this was our starting speed before connecting to Hola VPN.

As you can see, we were already working with a blazing fast connection. Then, we attempted to connect to a Hola VPN server in the UK. 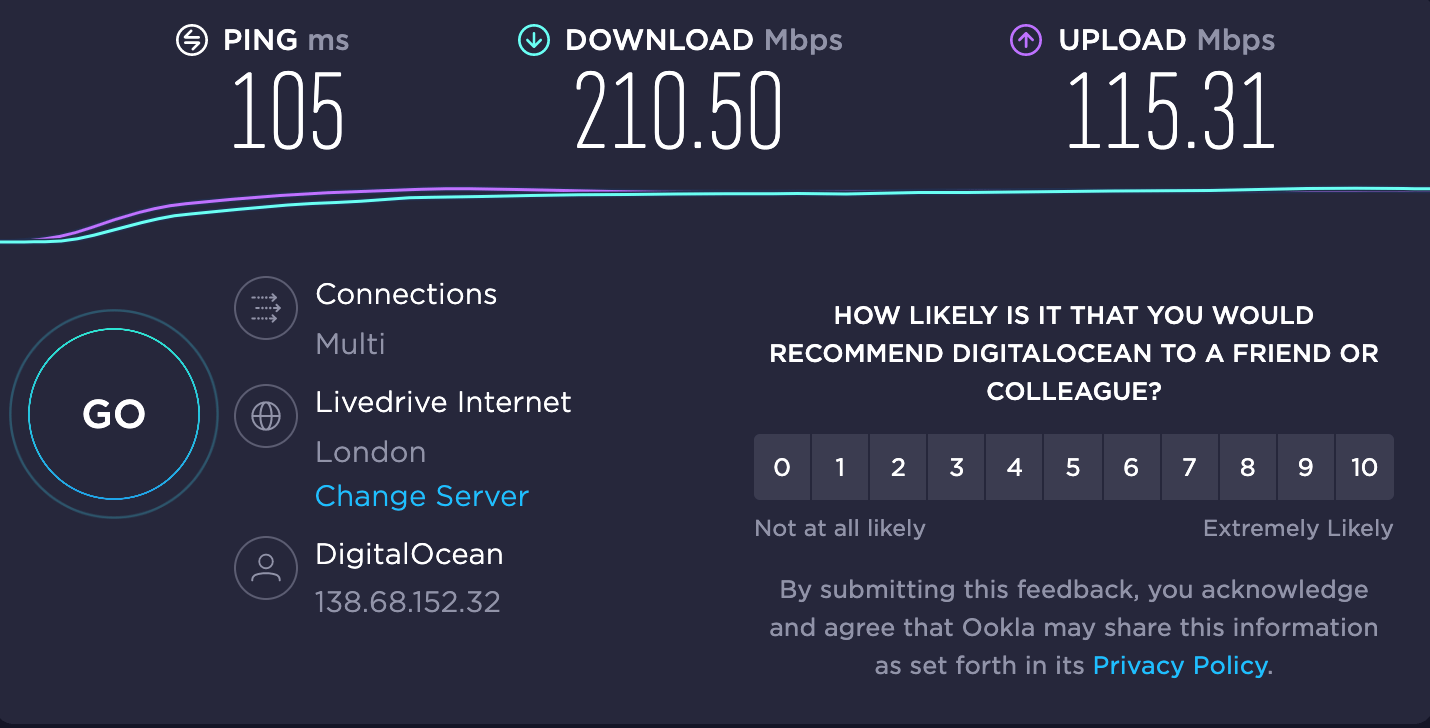 We had a decrease of about 17%, which isn’t the fastest we’ve seen, but it was still more than enough to browse without interruption.

Finally, seeking something a little closer to home, we connected to a Hola VPN server in the U.S.

It was roughly the same speed as the UK server but just a hair slower. This was likely due to the P2P nature of the connection.

This benefit is a double-edged sword, however. Though Hola VPN offers relatively high speeds when connecting to nearby servers, it’s mostly because Hola VPN works more as a peer-to-peer proxy rather than a VPN. In other words, with no encryption and virtually no security features, Hola VPN only provides high speeds because it isn’t taking extra steps to encrypt or secure traffic.

Even so, Hola VPN claims to offer servers in at least 40 countries. While it’s unclear how the VPN service can claim this figure with no dedicated server network, they’re at least clear about their practices: “We don’t need to have servers in each and every country as we leverage our peer-to-peer network in other countries.”

In summary, Hola VPN’s server network is mostly composed of its own users. As a result, performance and reliability vary while putting user privacy and security at risk over unsecured peer-to-peer networks.

Unfortunately, this isn’t an exaggeration. With no VPN protocols, no data encryption, and no security features such as an internet kill switch or double-hopping, Hola VPN users can expect little to no protection from major security threats. Combined with its peer-to-peer “server network,” Hola VPN might be one of the least secure VPNs we’ve ever reviewed.

But what do premier VPNs have to offer? At a minimum, most VPNs on the market offer military-grade AES 256-bit encryption and, at the very least, allow users to choose a VPN protocol. Common VPN protocols include OpenVPN, L2TP, and more, with most major VPNs offering at least a few for users to choose from. In addition to securing your VPN connection, these protocols are also crucial for preventing a DNS leak.

All that said, we can safely conclude that using Hola VPN makes you less secure than using your default connection. Even though you’re using someone else’s device and IP address as a VPN server (or, more accurately, a proxy server), someone else is also using yours — which could link any potential cyber crimes or suspicious activities back to you.

In addition to keeping extensive activity and connection logs, Hola VPN is also based in Israel. While Israel is technically a “safe” jurisdiction in that it can’t seize user data, it’s still an active contributor to international intelligence-sharing networks. As a result, Hola VPN users could have their thoroughly logged activity handed over to any major government on these networks.

While Hola VPN’s one privacy benefit is that it hides user IP addresses, there’s still a catch. Hola VPN uses a peer-to-peer network of user devices instead of a dedicated VPN server network. As a result, instead of routing your traffic through an encrypted VPN server, you’re simply adopting the IP address of another Hola VPN user.

Of course, this dynamic goes both ways. Though you may have some protection by simply using someone else’s device as a proxy, another Hola VPN user will likely be using your device in the same way. In doing so, Hola VPN compromises everyone’s privacy and security.

Users also shouldn’t expect support for torrenting. Despite relying on P2P networks, Hola VPN doesn’t offer dedicated P2P servers or support torrenting activities. Combined with little to no privacy or security, Hola VPN is a poor choice for torrenting and just about everything else.

While the thought of an actual VPN server may seem like a relief, Hola VPN provides next to no details about where these servers are located. Also, many users report automatically connecting to servers in countries other than those they chose.

Device compatibility usually isn’t an issue for VPNs. At a minimum, most top providers are compatible with Windows, macOS, Linux, and most mobile devices, with some even working on specialty devices like a smart TV.

The Hola user interface is extremely simple and streamlined. With very simple controls and a quick automatic setup, users will have no trouble navigating the VPN in either the app or browser extension.

User support is also limited. In fact, Hola VPN is a bit hard to contact, offering no live chat or phone support. While users can contact the provider via email, many report going days without a helpful response. Apart from this option, users can also consult setup guides and FAQs on the Hola VPN website.

While Hola VPN is free, users can pay extra for better performance and improved features. However, with Plus plans starting at $14.99 per month, even top-of-the-line providers like ExpressVPN become bargains.

Though all plans still suffer from security and privacy issues, premium members can use Hola VPN 24/7 instead of just 30 minutes per hour. Premium, Plus, and Ultra plans also promise higher speeds and improved customer support, but most users report only somewhat better performance.

Thankfully, Hola VPN provides a 30-day money-back guarantee on all plans. While it accepts PayPal and most major credit cards, it doesn’t accept Bitcoin or other forms of anonymous payment.

No price is worth sacrificing your privacy or security. With Hola charging some of the highest prices on the market for its premium plans, any leading VPN service would be a better value. 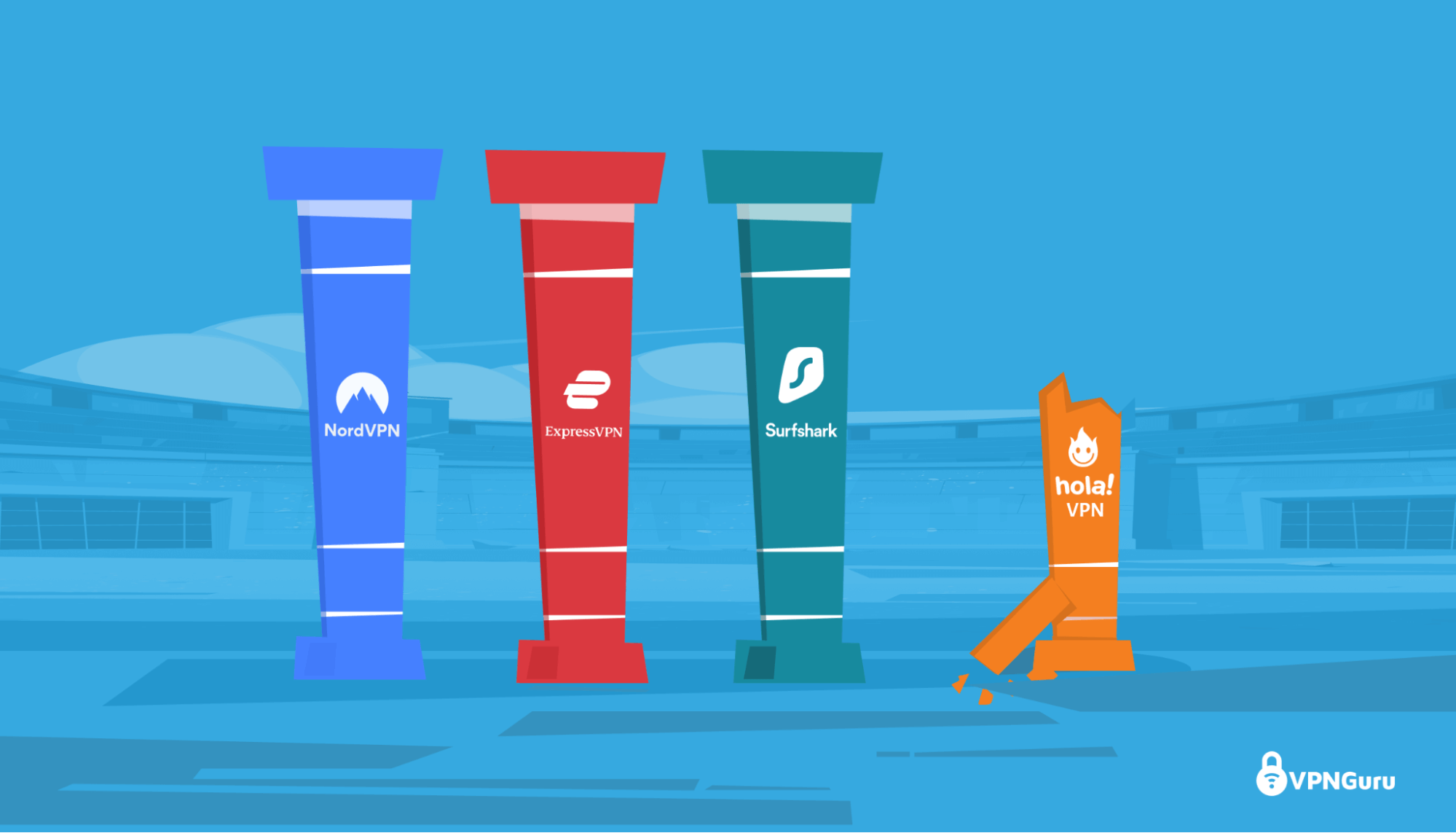 Here are a few of our favorites.

For the absolute best performance on the market, look no further than ExpressVPN. With a massive network of over 3,000 encrypted servers spread across 94 countries, ExpressVPN offers one of the most robust and secure VPN services around.

Another leading provider, NordVPN is famous for its robust security and strong unblocking features. Supported by over 5,000 encrypted servers in 60 countries, NordVPN offers users a great balance between performance and security.

At a starting price of $11.95 per month, NordVPN is also less expensive than Hola. Considering its overall better features, it’s another great value.

Learn more in our NordVPN review.

Surfshark is also less expensive than Hola VPN, with plans starting at $12.95 per month before long-term subscription discounts.

Learn more in our Surfshark review.

Is Hola VPN safe to use?

Unfortunately, we can’t recommend Hola VPN. With barely any security or privacy features to support its P2P network, using it might make you less secure than you were before.

Combined with unreliable performance and shady policies, we’d recommend almost any other service over Hola VPN. Thankfully, even premium services like ExpressVPN, NordVPN, and Surfshark provide top-notch security and performance for less than a Hola VPN premium membership.