With concerns over general security and privacy growing, users worldwide are looking to install a solid VPN provider to secure their data.

AVG, one of the most popular antivirus software on the market, also offers a VPN service named AVG Secure VPN.

For this AVG VPN review, we took a deep dive into AVG Secure VPN’s features and found stuff that we loved and other things that left us disappointed. We’ve outlined all the good and bad of AVG Secure VPN for you below. 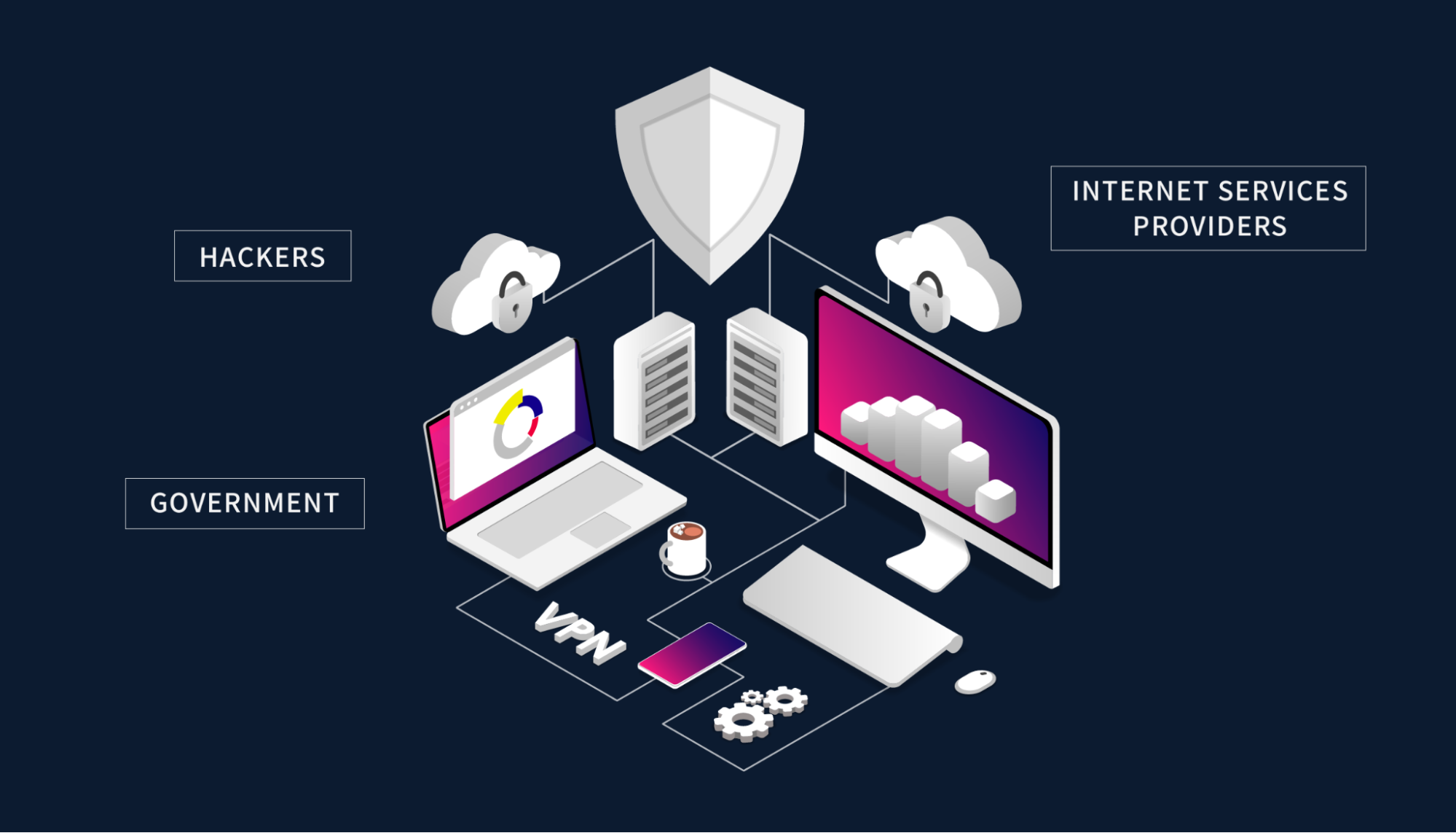 In simple terms, a Virtual Private Network (VPN) masks your IP address so that your internet activity cannot be traced. When you connect to a VPN server, all your internet traffic goes through an encrypted tunnel that is not accessible to anyone else.

This protects your activity and identity from hackers, government agencies, businesses, and any other snoops.

Apart from protecting your online privacy, a VPN can also be used to connect to servers in other locations to gain access to geo-restricted content. This also allows remote teams to work seamlessly.

Most VPNs typically fall under one of these two categories:

Individuals can use a VPN for general security, privacy, and for accessing blocked websites or geo-locked content.

ExpressVPN, Surfshark, and NordVPN are all prime examples of a remote access VPN. 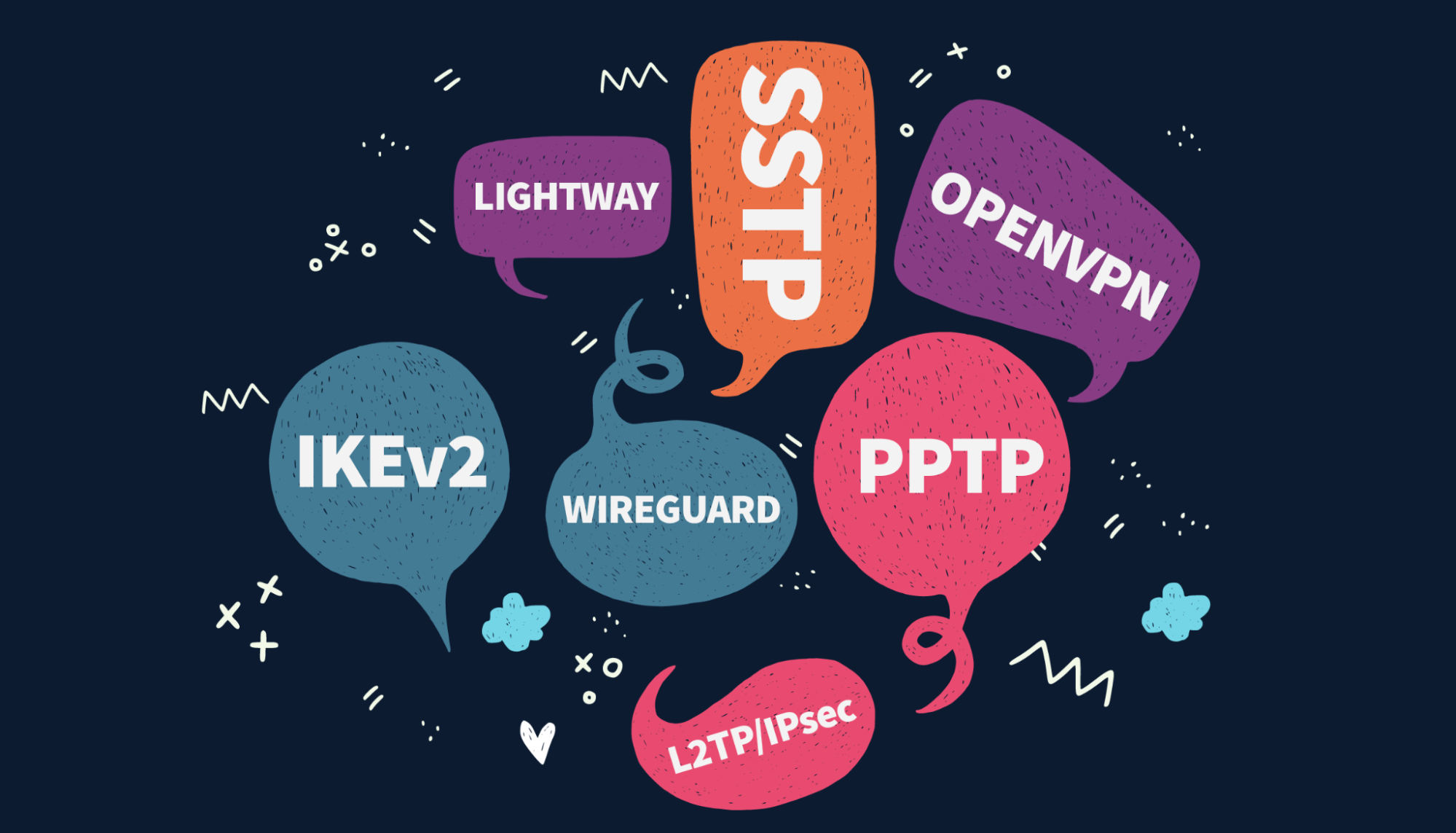 These are just two basic distinctions. VPNs can also be differentiated based on the protocols they use. Most renowned VPN providers use IKeV2, IPSec, SSTP, OpenVPN, or WireGuard, though there are many other protocols out there.

What to look for in a VPN?

There are hundreds of VPN providers out there, but how do you choose which is the best for you?

The first step is to decide WHY you want a VPN. According to a 2020 survey, general security (49 percent), general privacy (40 percent), and public Wi-Fi use (31 percent) are the three most common reasons for using VPNs.

Once you figure out why you want a VPN, you should look for the following features:

AVG Secure VPN offers many good features — its apps are easy to use, it doesn’t slow down your connection too much, and it can unlock streaming sites. But this VPN has some strong flaws as well.

We took a deep dive to provide a thorough AVG Secure VPN review. Read on to find out more. 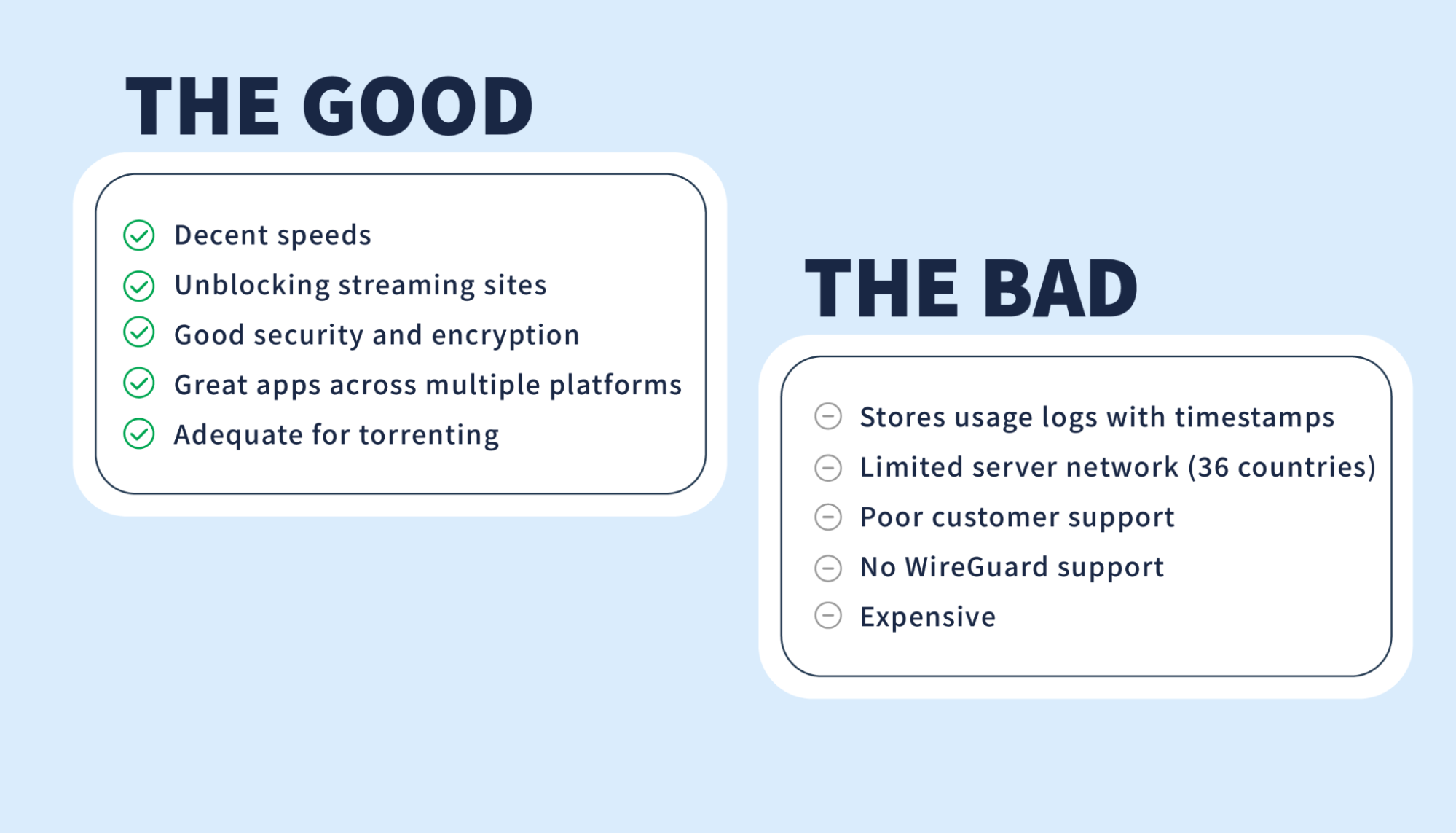 While AVG is by no means the fastest VPN out there, its connection speeds are adequate for a casual user.

You can watch HD streams on one to two devices and simultaneously browse other sites without a problem. Multiple speed tests have shown no noticeable speed loss, but this also depends on which server you connect to.

It’s worth noting that your performance metrics largely depend on your location and your internet connection.

AVG Secure VPN offers five servers across the U.S. and UK for streaming. You can use these to unlock geo-blocked content on Netflix and other popular sites such as Hulu, Disney+, and BBC iPlayer.

Since most streaming services actively try to blacklist VPNs and AVG Secure VPN has a limited server network, it could be easier for companies to blacklist this VPN in the future.

AVG Secure VPN is a good option for those looking to use public Wi-Fi networks.

AVG uses the OpenVPN protocol on Windows and Android and IKEv2 protocol for Mac and iOs. Both protocols use industry-standard AES-256 encryption. Users cannot alter the VPN protocol.

The provider also offers a kill switch option to prevent your actual IP address from being leaked in case your Wi-Fi resets or your VPN connection drops.

AVG does fall behind its competitors, however, since it offers no advanced security options (such as split tunneling). There is also no adblocking.

We did not detect any DNS or IP leaks when using the VPN, which is a good thing.

If you’re hoping to use this VPN in China, however, it won’t work. AVG has no stealth servers or obfuscation settings to get past the Great Firewall. 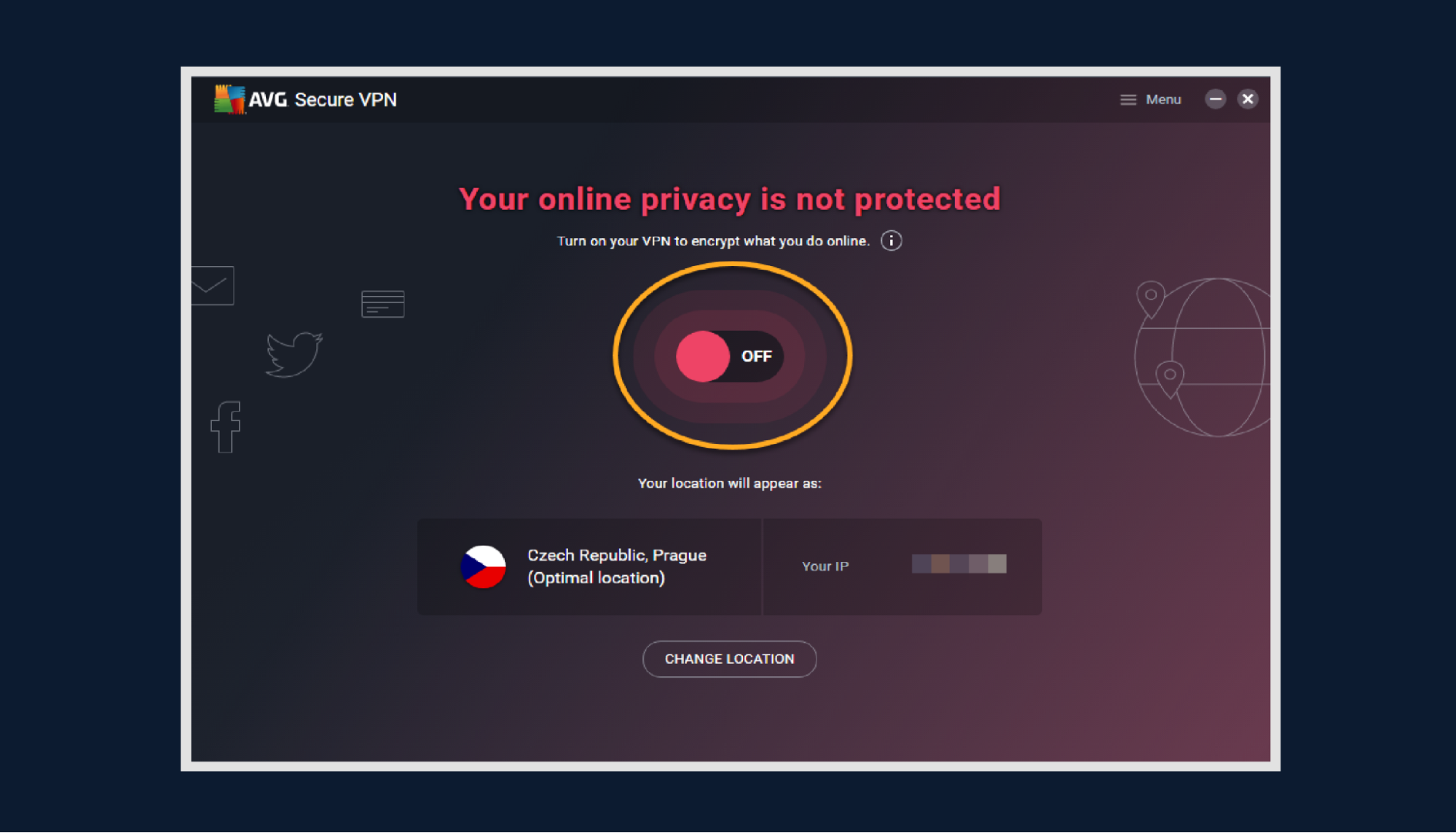 Installing and using AVG apps is easy and only takes minutes. There’s no complicated procedure or manual processes.

The app looks great, has an intuitive interface, and is easy to use.

AVG Secure VPN has several servers optimized for P2P sharing. These servers are under a separate P2P tab on the apps.

The provider’s P2P clients are located in the Czech Republic, Germany, France, the U.S. (3 locations), UK, and the Netherlands.

While these servers are generally suitable for torrenting, they could provide slower speeds when overloaded.

However, we suggest using other VPNs for torrenting since AVG stores logs. You can read more about it below.

AVG Secure VPN’s biggest drawback is that they store usage logs and timestamps.

While the VPN provider does not collect your original IP address or browser activity, it still collects a large amount of data.

That last point is significant. A subnet of your ORIGINAL IP address is around 3/4th of it. While this can’t be used to recognize the connected device directly, the chances of many devices with the same subnet, all connected to AVG, is relatively small.

All of this data is stored for up to 30 days. The privacy policy also states that AVG will disclose your information in certain circumstances (if requested by government order, legal requirements, or third-party subpoena).

AVG was acquired by rival Avast, known for its free Avast Antivirus, in 2016.

As a result, its headquarters is in the Czech Republic. This raises a red flag for privacy since the company must comply with EU data-retention laws. The country is also known to have shared data with members of the Five Eyes security alliance (an intelligence alliance between five countries) before.

Other providers like ExpressVPN or CyberGhost, keep no traffic logs, IP logs, or timestamps at all.

Moreover, AVG does not list all its servers online, making it harder for you to check the entire list before purchasing the VPN.

AVG’s servers cover the most popular locations such as the U.S., the UK, Canada, and other Western countries. There are currently only eight options for Asia Pacific countries.

This means users can only unlock geo-specific content in certain places. Moreover, a smaller network also means a lower bandwidth limit, increasing the risk of slowdown.

For a leading cybersecurity company, AVG’s customer support is quite disheartening.

While the VPN provider does offer live chat support and a phone number, finding the correct support page is not straightforward.

Users have to go through multiple support pages to find the right one for their VPN and fill out a form.

You can then choose between live chat and a phone call, but the live chat is often unavailable.

The numbers for the phone calls are also toll-free for customers in the U.S., UK, Canada, Australia, and New Zealand. Customers from other countries must bear the brunt of international phone call charges, which can rack up quite quickly.

Other than these options, users are left with FAQs and support threads to solve their problems. This is worrying since any issue with the VPN risks users’ online security and privacy.

WireGuard is a relatively new protocol, so it is understandable that AVG does not support it yet.

This wouldn’t be a con if many of AVG’s top competitors, including ExpressVPN, Cyberghost, and Private Internet Access, didn’t already support the protocol.

AVG Secure VPN is an expensive service, with a price point that doesn’t quite add up to the features it offers.

You can choose between a 1-year plan that costs $4.99 per month or two and three-year plans for $3.99 per month. You have to pay the full amount for the entire subscription up-front, but the company does offer a 30-day money-back guarantee.

For comparison, both Private Internet Access and CyberGhost offer a lot more features and no logging. Their annual plans start at $3.33 per month and $3.99 per month, respectively, and get cheaper for longer plans.

AVG is a decent VPN option, but there are other providers that offer features without storing logs:

ExpressVPN has a proven record of providing blazing speeds and strong privacy measures. It offers 3,000+ servers across 94 countries. This VPN provides a kill switch feature and gets brownie points for accepting payments in bitcoin, making a completely anonymous experience.

The biggest selling point of SurfShark is that it offers all the best features but adds unlimited device support. So, any number of devices can be protected using just one subscription.

PIA has been around since 2010, and it is a solid provider with 3,252 server locations. It won’t store any logs, allows for 10 simultaneous connections, uses SOCKS5 proxy, and provides so much more.

NordVPN is a renowned provider that has consistently shown to be secure and reliable. Good speeds, six simultaneous connections, a dedicated IP, and the ability to VPN into Tor are just some of its standout features.

Discover all the features of this service in our NordVPN review.

If you want advanced customization and play around under the hood, then IPVanish should be your first choice. It allows for unlimited simultaneous connections and support for Kodi, the open-source media streaming app with which most media fans are likely to be familiar.

To learn more, check out our full IPVanish review.

With over 36 million users worldwide, CyberGhost is a very popular choice among users. The provider boasts 6,000+ servers spread across 90 countries. A strict no-logging policy, a dedicated IP option, and 24/7 customer support are just some of the provider’s features.

You can read more about its features in our comprehensive CyberGhost review.

If you don’t want to delve into complex VPN functionalities and just want a simple VPN to unblock streaming services, then ZenMate is the way to go. It doesn’t have a lot of features, but it provides good speeds, excellent security, and unblocks Netflix and Disney+ — all at an affordable price.

Discover everything this provider has to offer in our ZenMate review.

A relatively new player in the VPN industry, UltraVPN was launched in 2018. It has a small server network with around 100 spread around the world. Despite this, the VPN offers decent performance and security.

Read our UltraVPN Review to find out more.

A VPN is meant to keep your online activity and identity safe and secure. While AVG Secure VPN does provide this security, its privacy measures are a turn-off for many users, with logging being the most significant issue.

After a deep dive, it’s safe to say that while AVG Secure VPN is a decent choice for basic use, there are much better options for users out there. You can read our other reviews to find the perfect VPN for you.