Home > Blog > How to Set Up an ExpressVPN Router Connection

How to Set Up an ExpressVPN Router Connection

VPNs provide critical protection, but most VPN users don’t install them on routers.

ExpressVPN is easy to install on your router because it has a dedicated app that runs extremely fast. It’s also easier to set up than other VPNs.

In this article, we’ll explain why a VPN is worth installing on your router. We’ll also highlight why ExpressVPN is our top choice for this.

Why you should install ExpressVPN on your router

Let’s take a look at why you should install ExpressVPN on your router.

Stay connected to your VPN 24/7

When you connect to your VPN through the app, you’re protected — but only when it’s turned on.

If you lose your connection for any reason — the connection to the VPN server drops or you forget to turn it on at all — your information is no longer encrypted. What’s worse is that these things typically happen without any signal, so you may realize your connection has dropped too late.

If you set your VPN through a router, you’ll be connected from morning to night without having to do anything else.

Covers all devices on your network

Always-on protection can save you a lot of stress, especially if you share your internet connection with children or other non-tech-savvy people.

Kids or older adults can end up on corners of the internet where they shouldn’t be, mistakenly downloading malware and unknowingly sharing their information with bad actors.

A VPN service puts an extra layer of protection between them and anyone with malicious intent. Many VPNs even include built-in malware and ad protection.

If they do somehow end up getting breached, the user’s IP address is hidden, and all of their data is encrypted. So, there isn’t much a hacker can do.

Lightway protocol is optimized for speed

Lightway is ExpressVPN’s new, proprietary protocol. It differs from standard protocols in that it’s lightweight, easy to maintain, and much faster.

The Lightway protocol can be used with your VPN router app, giving your entire household access to this speedy service.

The Lightway protocol operates with only 1,000 lines of code. There are fewer problems with this protocol since it’s so easy to audit. Plus, it uses less battery on your mobile devices due to its small size.

The VPN provider offers up to five simultaneous device connections. However, this only comes into play if you use the VPN app.

With a VPN router, you can protect every device connected to your internet at the same time. That means you can bypass the limit of five.

ExpressVPN is one of the best VPNs for multiple devices because it’s fast and easy to set up on your router.

Installing a VPN on your router takes all of the hassle out of using a VPN daily.

Once the VPN is installed on your router, you’re done. There’s no need to open the app every time, mess around with settings, or worry that you’re protected.

As long as you continue to use the same router, you’ll be protected 100% of the time.

Different ways to install a VPN on your router

There are a couple of ways to install a VPN on your router.

Some VPNs have made it so that you can install the service directly onto a router’s firmware. This is the easiest and most efficient way to get a VPN on your router, and ExpressVPN is one of the premium VPNs that supports this.

The downside is that these clients aren’t universal, meaning you’ll need one of the supported routers to make it work. You could go out and purchase one, but if you’re happy with the router you have, there are a few options.

The primary option to install a VPN client on an unsupported router is to use DD-WRT, an alternative firmware designed to work with VPNs.

It’s not that tough to install, but it could invalidate your warranty. The worst-case scenario is that you break your router while trying to install DD-WRT.

We recommend DD-WRT only to tech-savvy individuals. Otherwise, just purchase a router that supports ExpressVPN directly.

Odds are you already have one, as ExpressVPN supports the most commonly used routers.

Which routers work best with ExpressVPN?

Here is a list of routers supported by ExpressVPN. If you have one of these, you can install the VPN without messing around with the firmware.

This is the most powerful Linksys router recommended by ExpressVPN. This is a great option for large households that will use up to 15 simultaneous device connections.

This Netgear router is the best value for your dollar. It’s suitable for most families and your average-sized home, being strong enough to support up to seven devices.

Netgear is known for its user-friendly UI. If you need to go into the router’s settings, you’ll have no problem finding what you’re looking for.

This is another excellent ExpressVPN router model. It’s your standard router, supporting up to 10 simultaneous device connections at max speed.

You can purchase it with ExpressVPN pre-installed for $224.99. It’s not currently available on Amazon, but you could find it for a lower price without the VPN installed.

Other routers to try

These are all of the routers that ExpressVPN can be installed on directly. If you have a different router, you’ll have to go the DD-WRT route.

You can also try:

How to install ExpressVPN on your router

For simplicity, we’ll go over how to install ExpressVPN on your Linksys WRT3200ACM router.

The process will be similar to other routers, as they don’t differ all that much.

ExpressVPN is a premium VPN provider with over 3,000 servers in 94 countries around the world. If you’re looking to stay secure online or just want to unblock the latest streaming services, there’s no better VPN.

For more information, check out our full ExpressVPN review.

You’ll want to head over to ExpressVPN’s set-up page and download the firmware. Simply select the model of your router from the dropdown menu, and the download will begin.

Keep this page open, as the activation code will be used at a later stage.

3. Set up your router

Next, set up your router. If it’s a router that you already have, simply power it on.

If it’s a new router, you’ll need to connect the antennas, plug it in, and wait until the router’s power light displays a solid bar.

4. Install the firmware onto your router

Please note that installing the firmware onto your router will remove the current settings, such as your Wi-Fi name and password. You can revert to the default software at any time.

Head over to your internet browser and enter the IP address for the admin panel. By default, it is 192.168.1.1.

Sign in and head over to the connectivity tab on the left-hand side, under Router Settings.

From here, simply select “Choose File” and select the firmware you downloaded in step two. Hit “Start” and press “Yes” for any prompts.

5. Connect to the internet

Now you need to connect to the internet using Wi-Fi or an ethernet cable.

If you’re connecting over Wi-Fi, find the network Linksys(last five digits of your router’s serial number). The password will be on your router.

6. Set up the ExpressVPN app on the router

If you aren’t taken to the ExpressVPN router dashboard automatically, navigate to www.expressvpnrouter.com. 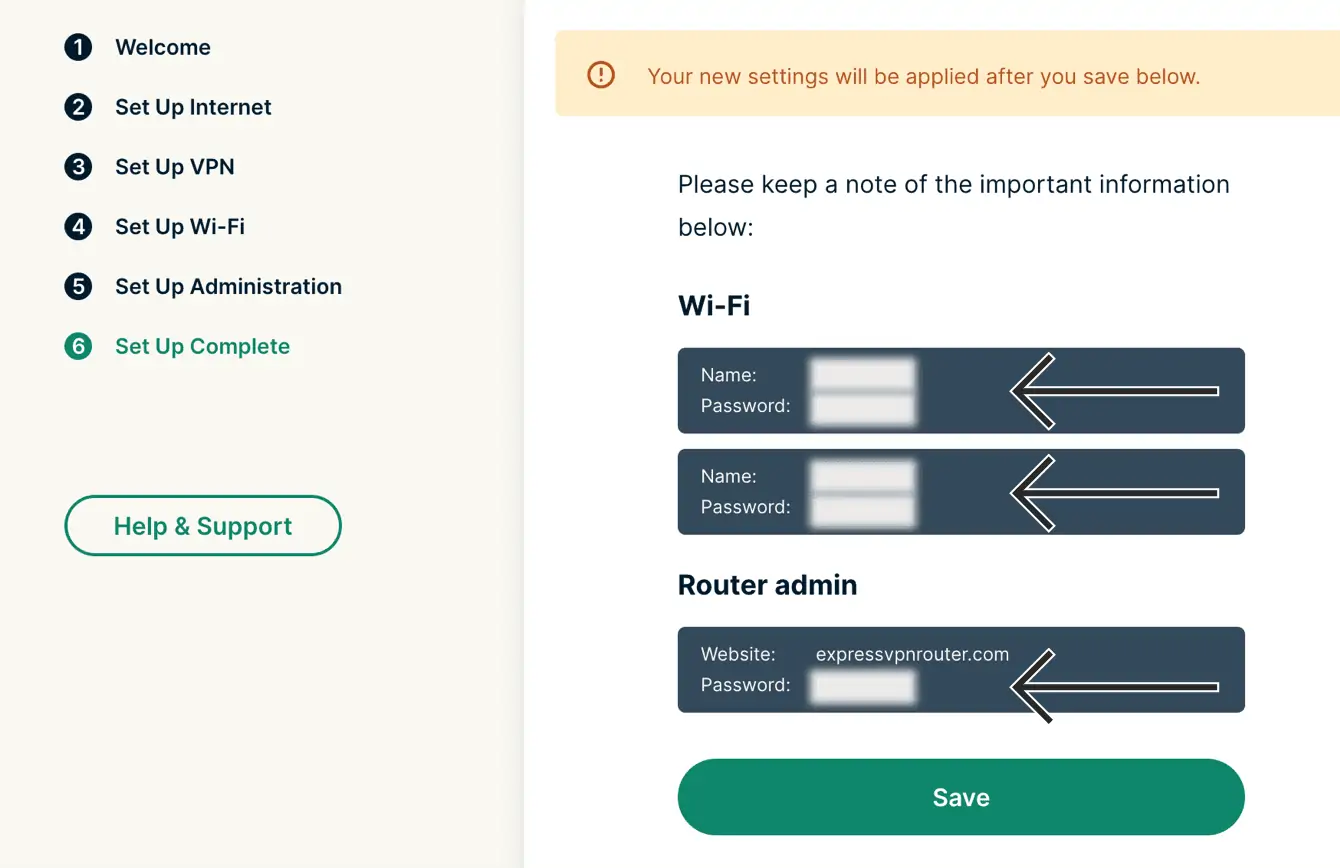 Here are some answers to frequently asked questions regarding VPN routers.

What is a VPN router?

A VPN router is simply a router with a VPN installed.

Other combinations of VPNs and routers will require more tinkering. Most VPNs have detailed instructions guiding subscribers through the process.

Do I need a special router to use a VPN?

No, you don’t need a special router to use a VPN. However, some VPNs can be installed directly onto specific routers that are supported. Your VPN’s website will have more information regarding which routers it supports.

Can I buy a router with a VPN already installed?

Yes, you can purchase routers with VPNs already installed through some online sources. If you’re purchasing a new router just for a VPN, doing this will save you a lot of time and effort.

Can I choose which devices are protected by the VPN?

You can choose which devices are protected by the VPN if your VPN supports split tunneling.

Split tunneling allows you to route some of your traffic through the VPNs encrypted tunnel while routing others through your ISP. Not all VPNs support this, so do your homework before subscribing to a VPN.

ExpressVPN and SurfShark both support split tunneling and are among the best premium VPNs on the market.

Will installing a VPN on my router void my warranty?

In some cases, yes.

If you purchase your router with a VPN already installed, it should still come with a warranty and everything will be fine.

The trouble comes when you try to install separate firmware onto your router to install a VPN.

ExpressVPN can keep you secure online. The easy-to-install router app makes it easy to protect your entire network from cyber attacks, keeping you anonymous when browsing.

By installing ExpressVPN on your router, you’re protecting every device connected to your network. This means everyone in your household, including those who aren’t tech-savvy enough to connect to a VPN, can be covered.

For more information about the VPN, you can check out our full ExpressVPN review.

How to Set Up an ExpressVPN Router Connection