Are you looking for a VPN that can help you set up secure and stable connections with game servers in distant locations?

If you want to protect yourself from DDOS and similar attacks that are often aimed at ruining your gaming experience, you need a secure connection.

You need a VPN.

But you can’t sacrifice the speed and stability of a raw connection. So which VPN is best for you?

In this article, we compare and contrast some of the best VPN providers on the market to find the absolute best VPN for gaming.

We break down speed, performance, server locations, reliability, split-tunneling, and other gaming-friendly features.

Why use a VPN when gaming?

A VPN can be a great addition for privacy-conscious gamers who want to avoid DDOS attacks or have issues with throttling from their ISP.

If you’re a serious gamer — especially in a MOBA or FPS game, every millisecond counts. So it may seem counterintuitive to add another layer to the connection — often adding a little extra latency.

But the simple act of connecting to and playing an online game isn’t as safe as you might think. There are some risks when connecting directly to a gaming server.

If your game’s server is close to you, the added step of a VPN could slow down your latency. But with the right VPN provider, we’re talking a handful of milliseconds added, or even, with the right server location, a minor improvement in ping.

That’s why we’ve handpicked a few VPNs in this article to providers with lightning-fast servers for this post — more on this later.

First, let’s explore exactly how a VPN protects you from DDOS and other attacks.

How a VPN helps protect you from DDOS attacks

If you’re a professional gamer, streamer, or aspire to be one or both, the last thing you want to run into are DDoS attacks.

What are DDoS attacks, and how do they affect online gaming?

DDOS or denial-of-service attacks are a type of brute force attack using a large number of servers and bots to crash a server.

They can also be used to crash and overload a specific connection. In the gaming world, hackers use this type of attack to ruin performances, interrupt esports events, or harass specific gamers.

For example, you may have seen one of your favorite streamers or esports teams affected by DDOS attacks while trying to play their favorite games. 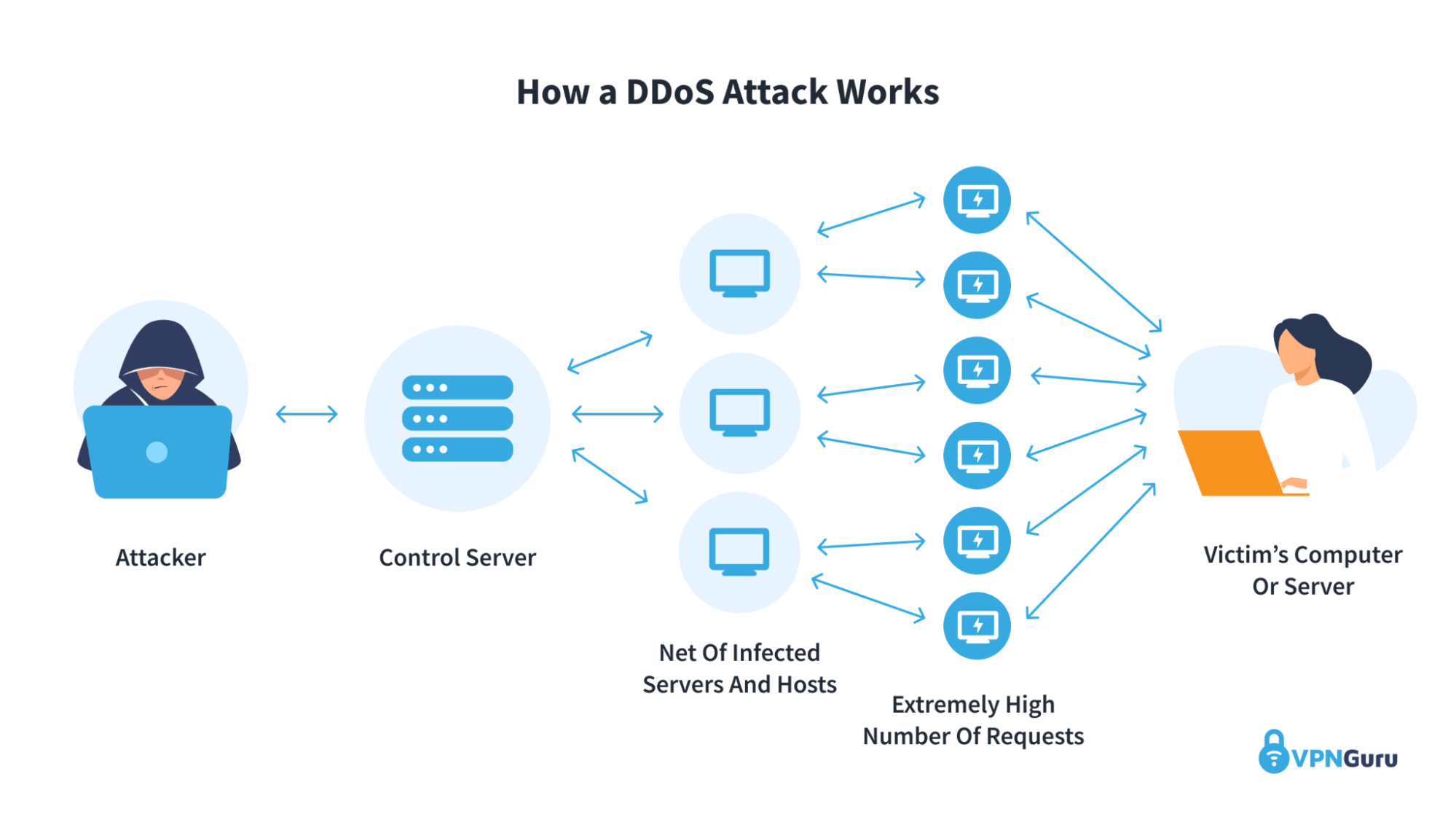 In certain games where you can permanently lose items, people even use DDOSing as a tactic to make players lose their hard-earned gear.

Needless to say, you don’t want to be a victim of a DDOS attack when you’re busy gaming your heart out.

How a VPN protects you from DDOS and other attacks

A VPN acts as a middleman between the gaming server and your computer. Instead of your computer, it’s a VPN server that connects to the game company’s server.

Without a direct connection, there’s no way to find your IP address, greatly reducing the chance you’ll be a victim of such attacks.

In the event of a DDOS attack, you can just switch VPN servers, and the attack will only amount to a minor disturbance.

A security-first VPN provider like ExpressVPN will keep you protected at all times — and the best thing is, you don’t even need to sacrifice the speed of your connection either.

A VPN also protects you from doxing

Beyond DDOS and other malicious attacks, there are other benefits to hiding your IP address. Doxing (or doxxing) is a practice where people find personal information on a person and reveal it on the internet.

Even if you’re playing under an anonymous nickname, your identity can still be revealed from your IP address and other factors.

With a VPN, your IP address won’t give away your location, which means they’ll have a harder time discovering your identity.

A VPN is a great asset for privacy-conscious gamers. To learn more about the data a VPN keeps safe, read our FAQ answer to the popular question: what does a VPN hide?

What is ping, and how does it affect the gaming experience?

Ping, or latency, is the amount of time it takes data to travel back and forth between your computer and the server it is connected to. 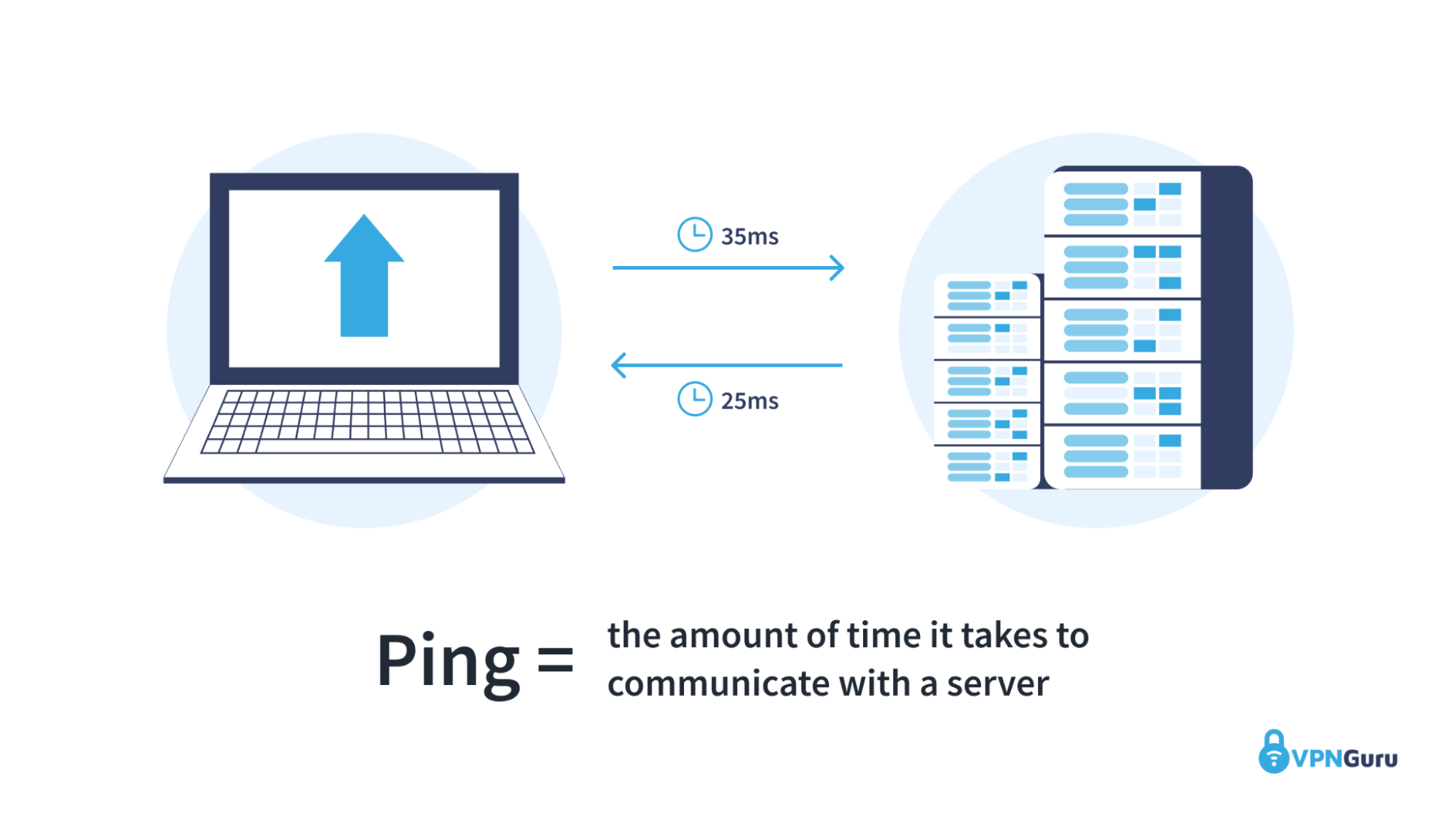 When you’re just browsing the internet or streaming, it doesn’t noticeably affect your experience as much as it does when you’re gaming, because you don’t rely on split-second actions and reactions.

As a gamer, particularly in an action-packed FPS, MOBA, or MMORPG game, ping can make a huge difference.

It can mean that you’re a millisecond too slow to pull the trigger in the game, missing a crucial shot, or that you mess up a raid boss mechanic and end up wiping your entire team.

As a general rule, you want your ping to be as low as it can be, but that’s not the only issue. Even if you generally have a low ping, an unstable connection with fluctuating latency is the hardest to deal with.

When you’re playing an online game, you get used to the ping over time. You notice how long it takes for your click to get a response in-game. If your ping suddenly spikes from 20 to 90 or higher, it can cause big problems.

It’ll make it hard to coordinate with your team, and you can end up completely missing the right timing for a skill shot.

Can a VPN reduce ping?

If you’re playing on a local game server, there’s a very low chance of you being able to lower the ping by using a VPN connection. Instead, there’s probably going to be a small increase in ping.

The good news is that with the right provider, you’re only going to see a slight increase of a few milliseconds.

But that’s only when you’re playing an online game where the server is virtually in your backyard. If it’s not in your state and country, the story changes.

The further the game server is removed from you physically, the less stable and slower the connection.

In some cases where the natural routing that happens is ineffective, using a midway VPN server can be a good way to reduce ping while playing on servers in other states or countries.

For example, if you want to play with friends in Europe while still in the US, a UK-based VPN server may help stabilize and speed up your connection and improve your experience.

It may even help you reduce other issues, such as packet loss, while also keeping you safe from DDOS and other attacks.

ExpressVPN vs. NordVPN vs. Surfshark: Which is the best VPN for gaming?

Let’s compare our best-in-test VPN providers — ExpressVPN, NordVPN, and Surfshark — and see which one comes out on top for gaming.

Speed and latency test results (US and North America)

For this test, we first did a benchmark speed test of our connection before connecting the closest server in the US to the test server itself.

While technically NordVPN had the lowest average ping, there were some fluctuations during multiple tests.

With ExpressVPN, not only was the latency remarkably stable, but it also had the fastest average connections and the best top speeds throughout the test.

Surfshark, on the other hand, impressed with its speed and stable connection, but the ping was a little bit high.

Read more in-depth test results and learn exactly why we are such big fans of the provider in our ExpressVPN review.

That’s why we’ve covered some of the server locations from the most popular games in the world, and where each VPN provider stands.

Below, we break down a few major games that have servers in various locations throughout North America.

Which provider offers the closest server and your best chance at a lower ping and stable connection?

League of Legends and Riot Games have all their eggs in one basket — the NA server is 100% based in Chicago, Illinois.

All three providers — ExpressVPN, SurfShark, and NordVPN — offer a major, full-featured VPN server based in Chicago.

So if your go-to game is League of Legends and you play on the NA server, every option is still on the table.

Counter Strike: Global Offensive offers a variety of US-based servers, including in Seattle and California.

Again, all providers have servers based in Seattle, Atlanta, and LA, as well as multiple east coast locations like New York and Miami.

Fortnite also has multiple server locations based in different states across the US.

Surfshark is the only VPN service with a server-based in Virginia, and none of the providers have a server in Ohio or Portland. Luckily, they all offer servers in nearby or even neighboring states.

California is well-covered, with ExpressVPN having multiple servers in LA, San Francisco, and even Santa Monica.

Call of Duty has a dizzying number of servers in the US alone. Surfshark, with servers in 20+ US cities, offers the best coverage. It offers servers in New York, Washington, Atlanta, Chicago, Dallas, and many other locations.

For server locations optimized for North American game servers, Surfshark comes out on top. Read our Surfshark review to learn more about the pros and cons of this specific provider.

All of these VPN service providers offer router apps, which makes it easy to set up a VPN for a variety of gaming consoles.

Split tunneling is a VPN feature that divides your internet traffic and sends some of it through an encrypted virtual private network (VPN) tunnel while sending the rest of your traffic through your regular connection.

That way, you can enjoy an encrypted connection while gaming while streaming video content on your original connection.

Let’s take a look at the overall gaming-friendly features of these providers.

All of the providers offer what you’d want in a gaming VPN. So let’s take a look at the price, and see if any of the VPNs stand out there.

Both Surfshark and NordVPN offer cheaper, long-term plans at $59 for 12 months and 24 months, respectively, but from when it’s time to renew the subscription, those prices change dramatically.

NordVPN charges $119 for every subscription renewal, and Surfshark charges $59 annually instead of every two years after the first two-year term.

Surfshark is the cheaper option and offers a lot of servers across the US, but there are some issues — for example, increased and unstable ping and slower connections.

If you’re willing to pay for a better experience, ExpressVPN is our recommended gaming VPN for 2022.

With the most server locations across the globe, the fastest and most reliable connection, and a strong focus on security and privacy, ExpressVPN comes out on top. It’s our recommendation for safe online gaming in 2022 and beyond.

Surfshark is a close second, with a lot of servers in strategic locations for US gamers, but unfortunately has a slightly slower connection.

If you want to protect yourself from DDOSing, doxxing, and other threats related to your IP address and online identity, a VPN is a great investment.

It can also help you stabilize your connection if the game you play doesn’t have any servers in your local area.